Ally, still upset with Austin, decides not to think about him and tries to focus on herself and her own career. She starts "Team Ally" with Trish as her manager. Austin still wants to prove his feelings for her, but she remains unconvinced that he truly cares about her and is over Kira. It was revealed in this episode that Austin was her first kiss. They start dating in this episode after Austin serenaded her with a song that was originally written by her. 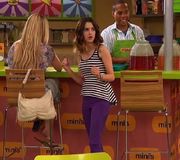 Add a photo to this gallery
Retrieved from "https://ally-dawson.fandom.com/wiki/Partners_%26_Parachutes?oldid=6946"
Community content is available under CC-BY-SA unless otherwise noted.