In this episode, Ally's friends, Austin, Trish, and Dez create an audition tape so Ally can get into the music school seen in Filmmaking & Fear Breaking. She passes the audition - only for her friends to realize that the music school is in New York. Austin's album release party is also a going-away party for Ally. When Austin sings an acoustic version of Can't Do It Without You, and a video of Team Austin's (Mostly Auslly moments) memories from the past is shown, Ally decides she wants to stay in Miami because she realizes her dream all along was to make music with her friends. 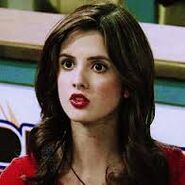 Add a photo to this gallery
Retrieved from "https://ally-dawson.fandom.com/wiki/Albums_%26_Auditions?oldid=6910"
Community content is available under CC-BY-SA unless otherwise noted.